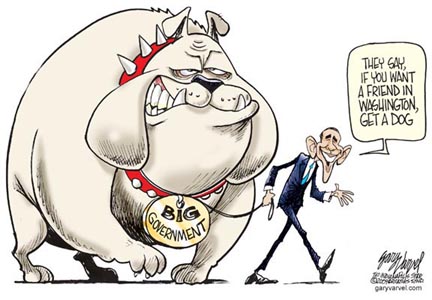 It seems for quite a while now, the political cartoonist has utilized the image, reputation, and symbol of the pit bull or it's older cousin, the Bulldog,  to illuminate their satire.  Of course, not only is the nature and reputation of the dog...its gripping tenacious and vicious talent useful in creating meaning, but the grotesque physic  needs not much exaggeration to generate a truly humorous effect.    These days, with pit bulls making headlines of their own, it's easy for these humorists to achieve an easy double entendre.

Cesar Milan lamented on this fact, boo hoo hoo hoo....that the pit bull again "victimized" again, being utilized as a symbol for political satire and rhetorical art. He just needs to get over it.  Chihuahuas, Cocker Spaniels and Daschunds have reputations too (being always drug into the conversation about BSL by pit bull advocates) , but as metaphors and similes.... just wouldn't conjure up the same strong images and connotations.

"As I was browsing the news this week, a headline caught my eye: “Romney Takes Pit Bull Approach in Florida.” I looked at Junior and wondered if the journalist meant that Romney was going to become a calm-submissive presence, devoted to the American people. But of course, that was not they meant. They meant that Romney was going to fiercely attack his opponents, or in the journalist’s eyes, act like a pit bull. Seeing pit bulls being referred to in this manner upset me of course, but didn’t surprise me. If any of the candidates running for office think they have image problems, they have nothing on a pit bull."


Boo hoo hoo hoo.
Lament as he may....it's just so funny to put the head of a tenacious politician on the head of a bully dog.  One of the early examples I found was of Teddy Roosevelt. Reportedly, he was an actual pit bull owner, and he did popularize the euphemism of the day, BULLY!   Here's some more of those! 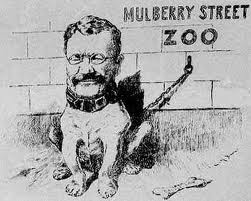 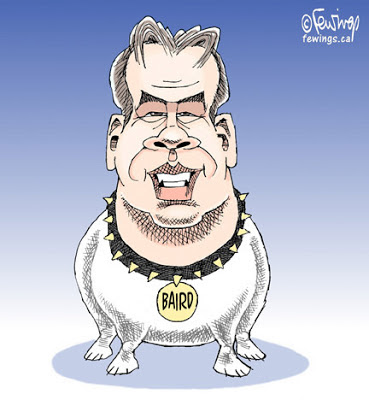 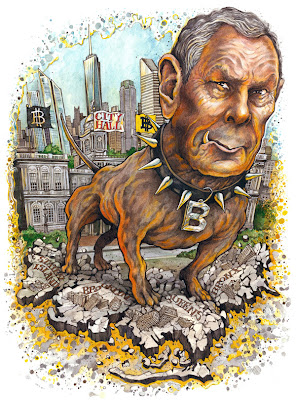 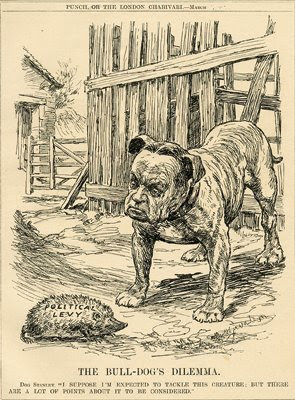 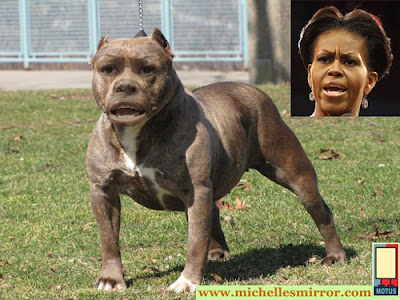 Even our fashionable first lady is not immune to this treatment.   I've seen her morphed into many other critters as well.  No one is immune, save perhaps the children of the president.

Speaking of which...we all waited with great anticipation as our newly elected president made the harrowing choice of just what kind of puppy he would fulfill the promise of a dog to his two daughters.  A pit bull would have made a very interesting choice.... 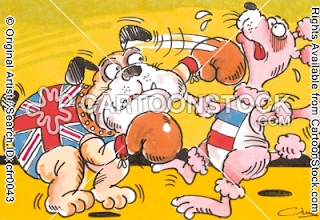 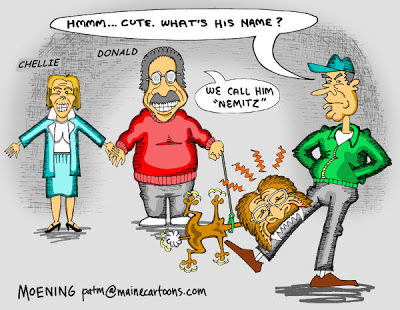 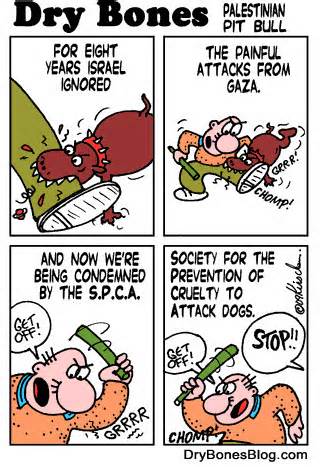 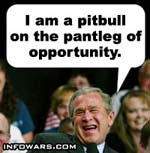 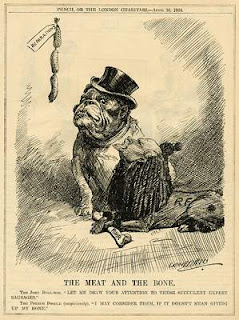 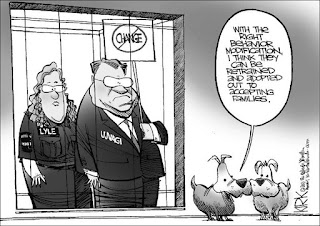 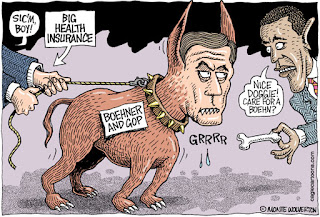 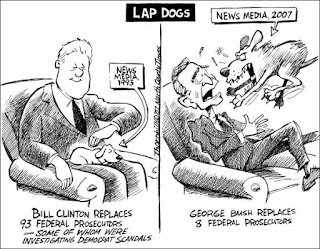 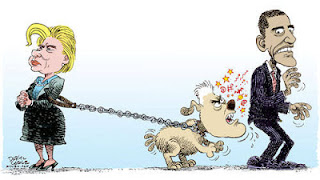 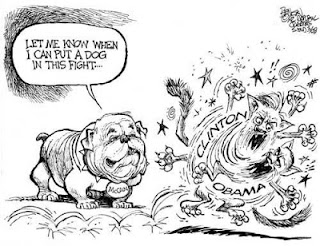 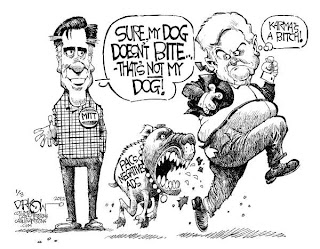 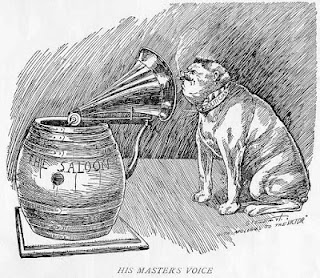 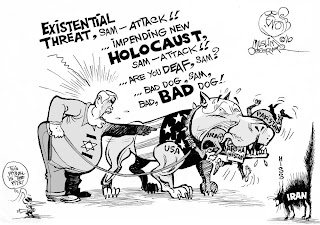 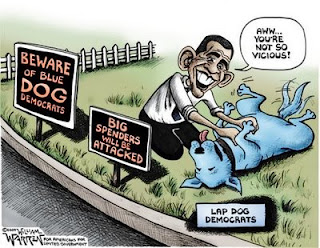 Of course, the pit bull owner and advocate runs the political spectrum.  You have your vegan, tofu eating pit bull advocates who march for awareness, and likely vote Democrat or even the Green Party.  Then you also have your gun rack in the back of the pick-up truck Republicans.   There's people who are anti-BSL and pro gun laws, and vice-versa and every single kind of combination.  There's also tofu eating pro-BSL Democrats.   Animal rights advocate organizations such as The American Humane Society have taken a pro-pit bull stance, ignoring the carnage they cause on other animals but apparently not ignoring the millions of dollars the very slick political agendas can generate.  And very surprising... left wing pro-animal rights organization PETA has taken an anti-pit bull stance.  There are also gun toting pit bull haters who vote either Democrat or Republican.  I believe personally, that guns need to be legal as long as pit bulls roam the streets.  Guns are regulated, by the way, good thing.   It's Fascinating!   Pit bulls can bring people together, let's all sing Kum By Yah.  People of diverse political leanings, brought together by the pit bull.  Those who may never be friends, never be able to stand the company of one another, kinship found because they  have a pit bull, OR they had a bloody pit bull experience.

Then you have your dog rack on the top of the car Republicans.  Isn't it odd they used a pit bull, and not an Irish Setter for this Ad?  I rather suspect, that this was created by one of those tofu eating pit bull advocating Democrats. 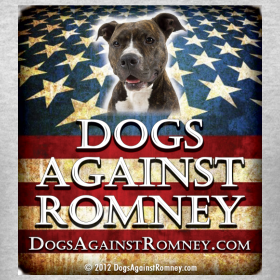 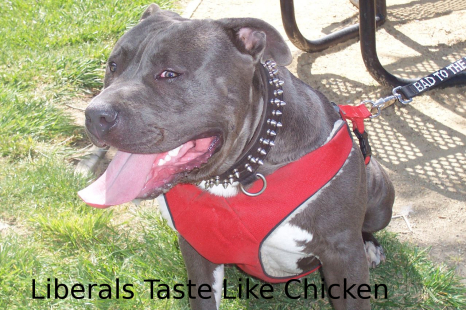